Hayley’s such a natural with children; could a change of career plan be on the cards?

Monday evening, exhausted after a visit from a very lively two-year-old…

The dog’s stopped quaking and has finally been persuaded to venture downstairs from the safety of my duvet. The breakables have been returned to their usual positions two feet lower than the emergency safe places we hastily stashed them. All the cupboard doors have been screwed back on; the contents restored. Jesse, one determined little explorer – his unspoken motto: ‘inside every cupboard a new adventure’ – has left and peace reigns once more. 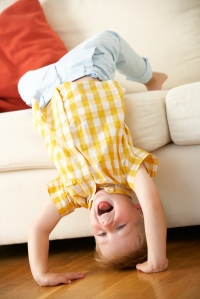 He’s adorable and we all love his visits but it’s like having a mini-whirlwind in the house. Everything not screwed down will be upended, hurled like a shot put or, in the case of the dog, chased and pelted with toys/drink beaker/biscuits. Now he’s gone home with his patient saint of a mum. But while the rest of us are lying down in darkened rooms with damp flannels on our foreheads, Hayley’s still beaming. “If only he could stay here always,” she says.

I pull the flannel more firmly over my eyes. I know I’ve done it a few times over, with four children and a stepdaughter, but it all seems so long ago. I can’t honestly imagine how anyone copes day after day with such a demanding little bundle of energy. And I’m frankly amazed at Hayley’s total character change in the presence of her little nephew.

She’s not best known for her patience and calm. The house frequently trembles with her meltdowns and outbursts. I have come to know that having a hearing loss is frustrating and tiring, a constant battle struggling to catch everything and not miss out, so I try to make allowances, though there are limits. And recently hormones have come into play, unleashing even more scathing fury and spectacular intolerance upon the rest of us. But something about Hayley comes alive when small children are around. It totally transforms her into a mature, patient, responsible little adult. And I won’t pretend I don’t like it!

Hayley has always got on with children younger than her, seems in her element with them. In the last two years she’s done lots of babysitting, worked on a job scheme at a local nursery and did her work experience at another nursery, both of which she loved and got great reports. Maybe it’s easier getting round the deafness issues – small children have a far less sophisticated grip on language than Hayley’s own peers. Their needs are simpler and they won’t object or get impatient if Hayley hasn’t heard and asks them to repeat themselves.

Jesse’s latest visit demonstrated Hayley’s childcare skills again. And he loved her – a great playmate, good for cuddles and endless repetitions of his favourite chase-me-up-the-stairs game or peek-a-boo behind the curtains.

Although Hayley has long wanted a catering career, I can see childcare vying to become an option. The rewards are very instant – that irresistible giggling, little arms outstretched for a pick-up – and all without the pressures of trying to communicate in a peer or adult environment. I can totally see the attraction.

Hayley is excited. I know this because she hasn’t stopped talking, at speeds of up to 110mph, for the last five minutes since she barrelled through the front door. It’s like being in a room with a hyperactive chimp who’s just downed a dozen large espressos.

That’ll be the new job then. She’s just started helping out at a nursery for a few hours every Wednesday after school.

Hayley adores kids, and they seem to love her, so she’s in her element there.

One thing surprised me, though. She said that when some of her young charges were curious as to what her hearing aids were, she told them they were earrings.

When I asked her why, she just shrugged. “Just didn’t want to get into explaining it all to them,” was all she’d say.

It’s unusual for Hayley, because she has never seemed self-conscious about her hearing aids or her deafness. She’s always been comfortable talking about it if anyone asks, and has no problem asking teachers to repeat themselves if she can’t hear.

Naturally, we’ve always encouraged her to be accepting of her aids, and the audiologists are brilliant. Whenever she needs new ones, it’s like they’ve all the time in the world as they let her choose from a whole range of moulds and aids, different colours, glittery ones, pearlised finishes, all sorts.

They hold open a display case of the whole range while madam sits there ‘umming’ and ‘ahhing’, trying to make up her mind like she’s choosing a ring at the jewellers. I’ve even had to model them on my ear before to help her decide, at the very accommodating audiologist’s suggestion.

Just recently, Hayley chose two swirled colours on her new mould, only possible, the audiologist told us, because they’re on good terms with their suppliers.

So Hayley’s always seemed pretty comfortable with it all.

“At 15 she’s become much more self-conscious”

I guess it’s her age that’s kicking in. At 15 she’s become much more self-conscious, especially about her appearance. It’s natural for a teenager.

So just like she’s overly conscious of her hair, makeup or clothes, I suppose there’s no reason to think her hearing aids would escape. After all, they’re part of her.

I suspect that, because the kids look up to her as a ‘teacher’– some call her ‘Miss’ which she thinks is very cool – she’s enjoying the sense of feeling like a proper grown up. She just doesn’t want to risk being seen as anything other
than an everyday, common or garden grown up in the children’s minds.

I’m certain that once she’s more secure in her role there and realises it won’t make any difference to her coveted status as a grown up, she’ll be happy to chat to them about it – at endless Hayley-style length!